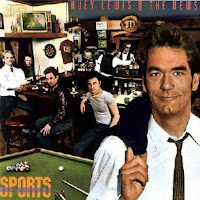 Note: the CD I listened to was not the expanded 1999 reissue.

This past week I received an email concerning my upcoming 30 year high school reunion.  I was immediately swept into a nostalgic daze (granted, that doesn't take much).  Such a daze usually means that I pull out the old high school annuals and listen to Simple Minds or Joe Jackson as I wistfully thumb through the pages.  But for some reason I couldn't get If This Is It out of my mind so I figured I'd listen to Sports this time around.  Sure the lyrics are silly, but most songs here come with at least one infectious hook.  Add some top notch self-production to those hooks and the radio friendly songs become mindlessly enjoyable.   So mindless that I've heard these songs hundreds of times yet don't know the lyrics when I try to sing along.

Guest critic Patrick Bateman claims that this album is when Huey Lewis & The News came into their own, commercially and artistically: "The whole album has a clear, crisp sound and a new sheen of consummate professionalism that really gives the songs a big boost."  Years later, Lewis would take issue with Bateman's work. 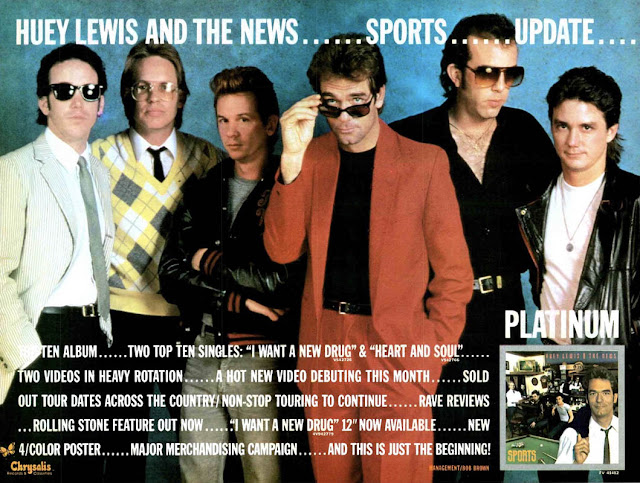 The fact that this album hit #1 in 1984 is quite a feat.  Only 5 albums held the top spot that year.  In addition to Sports: Michael Jackson's Thriller, the Footloose soundtrack, Bruce Springsteen's Born In the USA, and Prince's Purple Rain.

Tracks:  My favorite tracks are Heart And Soul and If This Is It. I'll usually skip Bad Is Bad, You Crack Me Up, and a too fast, below par cover of Hank Williams' Honky Tonk Blues.

Personal Memory Associated with this CD:  Because songs from this disc were in heavy rotation on MTV and the radio during the 1983-84 school year, music from this album played a large role in the soundtrack to my senior year of high school:
After the band played Houston in 1984, a girl showed up at school with a concert tee that had "I WANT A NEW DRUG" printed in huge block letters on the back of the shirt.  Since I lived in the Bible Belt, I felt positive the girl would get called to the office and told to change her shirt.  I don't know if she ever did.

I also have a memory of The Heart Of Rock & Roll playing loudly at a senior pool party one evening.  When the list of cities in the song finally got around to Austin, all my friends who were headed to UT that fall went crazy like they'd just won the lottery.