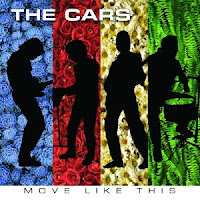 Highly anticipated (by me at least). In 2011, The Cars give us some of the best music of 1984. Absolutely no attempt has been made to update their sound. The Cars obviously know their audience is 40-somethings like me. The band isn't trying to win over new fans. We still get keyboard sounds that sound like they're from a Commodore 64, slashing rhythm guitar from Elliot Easton, and uptight vocals from Ric Ocasek. It's a typical Cars album: 38 minutes long, some great songs, a few good ones and a couple of really bad ones. Rolling Stone gave it 3 1/2 stars; that's about right. The Cars were always a better singles band than an album band. I'm glad the band got back together. This CD is enough to let me forgive the band for that silliness with Todd Rundgren in '05.
Peak on the US Billboard Top 200 chart: #7 (May 28, 2011)

Tracks: The great songs are Blue Tip, Keep On Knocking, Sad Song, Free and Hits Me. The good songs are Too Late, Drag On Forever, and It's Only. Songs to skip include Soon and Take Another Look.

Personal Memory Associated with this CD: Since I've only had this CD for a week I know I should simply say "none," but the voice of Ric Ocasek instantly takes me back to high school in the BC. I feel like I should be listening to this on a cassette in the Markmobile on my way to work the drive-thru at Burger King.
Posted by Mark at 7:18 AM

Email ThisBlogThis!Share to TwitterShare to FacebookShare to Pinterest
Labels: 2011, The Cars