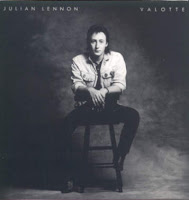 While certainly not a Christmas album, I always think of this release as very winterish (see personal memory, below), so that's why I've chosen to listen to this CD this week. It's a good album, not a great album. Yes, Julian's voice sounds eerily like his father's. But because of production by Billy Joel's producer, Phil Ramone, this sounds more like a Joel album than a John Lennon album. Julian wasn't a bad songwriter; his downfall was that he wasn't as good a songwriter as his father.
Press of the time:

Tracks: The singles Valotte and Too Late for Goodbyes are '80s classics. Other good songs include On the Phone, Well I Don't Know, and the closing track, Let Me Be, which is as Beatlesque as this Lennon can get. I usually want to skip 3 tunes: Space, Lonely, and Jesse (which seems completely out of place here). 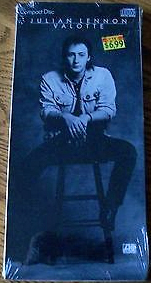 Personal Memory Associated with this CD: In December, 1984, I returned home after my first semester away at college. During my 4 month absence, a new FM radio station had hit the airwaves in my hometown, one that played "adult contemporary" music. I certainly could have listened to any number of Houston radio stations, but because of the novelty of this new station, I listened to the new station almost exclusively during my stay at home. This station played the song Valotte at least once an hour back then. This is why I think of the CD as a winter one, even though I listened to the LP throughout the spring semester.
Posted by Mark at 5:46 PM