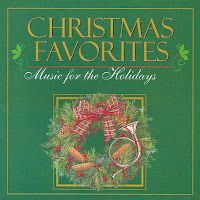 A 1997 compilation of traditional holiday music; issued by Sony Music Special Products. Selections previously released on albums from CBS-associated labels. There's also a logo for Paper Magic Group on the back cover and CD itself. No liner notes and only a simple cardboard sleeve, but not a terrible 'background music' compilation considering it was probably picked up for free with the purchase of greeting cards. 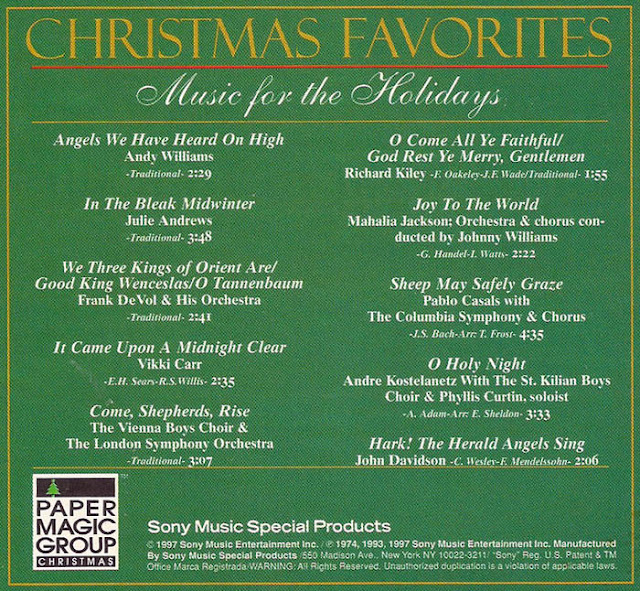 We're treated to two seldom heard Christmas tunes, In The Bleak Midwinter and Come Shepherds Rise. The former features a 19th century poem set to a beautiful melody from Gustav Holst; the latter is a lively choral setting of a sixteenth-century Bohemian carol. Also, the Bach piece, Sheep May Safely Graze, isn't really a Christmas piece, but the pastoral livestock lyrics are close enough, I guess. And while he gets top billing, famed Spanish cellist Pablo Casals really isn't featured in the arrangement. Regardless, I enjoy most all of them, particularly the tracks from Julie Andrews, Vicki Carr, and Mahalia Jackson.
Personal Memory Associated with this CD: None, but it reminds me quite a bit of this Christmas Wonderland CD we featured in December 2021, which featured many of the same artists. Two recordings appeared on both compilations: the medley from Richard Kiley and Joy To The World by Mahalia Jackson.