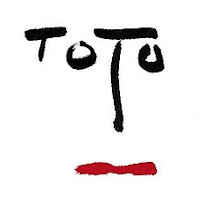 Note: the CD I listened to was the 2014 Rock Candy "Remastered & Reloaded" Collector's Edition: 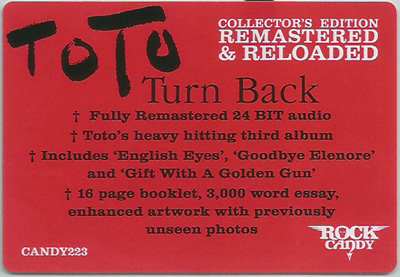 I was fan of Toto IV from the get-go so I thought I'd check out this 1981 album which immediately preceded it. Guitarist Steve Lukather seems to have come up with some great, aggressive riffs for this guitar-heavy, arena-rock album and then the band didn't do much with them. There's nothing really objectionable/skippable here, but there's nothing particularly memorable/hummable, either. But the classic Toto chops are on full display, so it's got that going for it. Bobby Kimball's voice was fantastic back then but all the players are first-rate - that was the point of putting the group together, right?
From Lukather's website:

Turn back was our attempt at "arena rock" as we were starting to be pissed off that the Sony were putting out all the ballads and the softer side of us, like 99 etc... *I* did NOT want this to happen, unfortunatly it did anyway. We worked with Geoff Workman who was Roy Thomas Bakers engineer (Queen-Journey-the Cars etc...) and at THAT time... THAT was what was happening. It was an experiment. I think that there are some great tunes on the record, it sounds a bit strange and VERY different from our other records but I have very fond memories doing it. [sic]

In their list of "100 Classic Album Covers" (issue 617), Rolling Stone magazine ranked Tony Lane's Turn Back album cover at #55 which appears to be the most praise this album has received over the past 40 years.
Press of the time:

Tracks: If the ad below is any indication, the lead single from this album was Goodbye Elenore (it 'bubbled under' the Hot 100 at 107). I could say it doesn't really stand out, but none of the tracks do. The only other track that saw Billboard chart action was track 3, Live For Today, which peaked at #40 on the magazine's very first Top Rock Tracks chart in March 1981. If you put a (golden) gun to my head today and made me pick favorites, I'm thinking the best track is Gift With A Golden Gun while my least favorite is the more-experimental title track, which doesn't fit in with the vibe of the remainder of the album. Did I just write that no tracks stand out and then went ahead picked a favorite anyway? Hunh, I guess I did.

Personal Memory Associated with this CD: Around the time this album was released in January 1981, I was starting the spring semester of my freshman year in high school. My high school scheduled six classes a day back then (today, 8 is the norm around here); I "studied" American History, Algebra, Band, Theatre Arts, English, and Physical Science. I had questionable teachers in history and math, but the others were at least competent. Still, there was a lot of "instruction" along the lines of  'read the chapter and answer the questions at the end' and worksheets that semester. But that really doesn't have much to do with this Toto album other than coincidental timing, so never mind. As you were.
Previously revisited for the blog:
IV (1982)
Posted by Mark at 6:43 AM

Email ThisBlogThis!Share to TwitterShare to FacebookShare to Pinterest
Labels: 1981, Toto