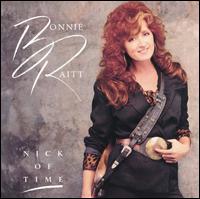 I like most everything about this sensual, bluesy, slick pop-rock collection. Bonnie writes and selects music that's perfect for her voice, gets a great supporting cast of musicians, works closely with producer Don Was, and let's not forget her underrated bottleneck slide guitar playing.

Tracks: Even though the album is definitely front-loaded, I like the whole thing and have no problem listening to tracks 1-11 in order. Thing Called Love and Love Letter are the cream here; other top tracks include the title track, Cry On My Shoulder, Real Man, Have A Heart, I Will Not Be Denied, and The Road's My Middle Name. What was the last track on side one of my cassette, Nobody's Girl, is a perfectly fine cut, but to my 23 year old ears in 1989, its quiet simplicity didn't fit in with the rest of the album, so I'd often flip the cassette over and rewind to start side 2. I like to point out that Love Letter and Have A Heart were written by Bonnie Hayes because I'm wild about that Bonnie, too.


Personal Memory Associated with this CD: I was a casual Raitt fan at best until I saw the video for Thing Called Love and I was all in. Me and thousands of others.


I spent the most of the summer of 1989 living in my parents' spare bedroom looking for my first teaching gig and waiting for my mid-August wedding. No, it wasn't a particularly good idea to think about starting a marriage without any income, but somehow we made it through. This album reminds me of that summer, particularly, working with my church's youth group - and by working, I just mean hanging out with them at minor league baseball games and whatnot, being a sounding board for their hopes and angst.

For years I foolishly made do with a greatest hits compilation instead of buying this CD. I'm glad to have rectified that situation as this is a fantastic summer steamy porch/open road album.