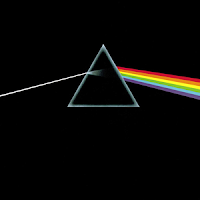 Note: the CD I listened to was the original CD issue (1984?), not one of the subsequent reissues.

Per my idiosyncrasies, the three following conditions must be met for listening to this album:
Check, check, and check.  Let's do this.

The legacy of this album is well-documented so I won't go into all that.  I can't pick out any one thing that I like best about this album, because it's the overall soft, lush sound that is so attractive to my ears.  It would seem Alan Parsons deserves as much credit as the band members. 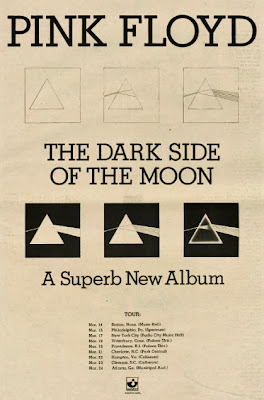 Tracks:  There's really only two tracks, aren't there?  Side one and side two.  I prefer what was side one, especially The Great Gig In The Sky.  Side two actually starts out with my least favorite track, Money, but the remainder rebounds quickly culminating with Eclipse that leaves me wanting more.


Personal Memory Associated with this CD:  Not having the kind of family members that would hip me to such things, I didn't hear this album until 1987.  And that's probably for the best.  I was visiting my buddy Richard and he had just purchased a CD player along with this CD.  Late one night after some cognac, he put this on, handed me some headphones and said goodnight.  My only previous experience with Pink Floyd had been limited to The Wall (the movie and the singles from the album).  Of course, I had heard about the album for many years and just figured this album was a stoner thing that I didn't need to mess with.

I had no idea what to expect, but I certainly wasn't prepared for what came over the headphones.  I sat in darkness as the experience washed over me.  At that time, the digital CD experience was new enough to my ears, but add all this sonic depth and I was a little overwhelmed.  I wouldn't say I loved it at first listen, but I was definitely intrigued.  As such, I had my own copy of the CD within 3 months.  I've never ripped it to iTunes because I want to hear the whole thing from start to finish under the conditions listed above.  Even when the local classic rock radio station plays Money, I immediately switch stations because I don't want to hear that song out of context.
Posted by Mark at 10:33 PM