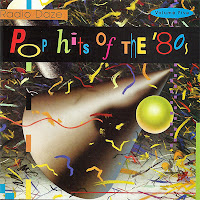 Disc 5 of 5, covering songs that peaked on the chart between November 1980 and June 1981 (my freshman year in high school).  Complete with great liner notes, this is one of the stronger volumes in the series with 8 of 12 good tracks.

Tracks:
Personal Memory Associated with this CD:  Riding around town on my Sears 10 speed bike.  I had a yellow handlebar-mounted AM radio which blasted songs such as these as I rode to the store to purchase comic books and candy.  I must have been as annoying as all get out.